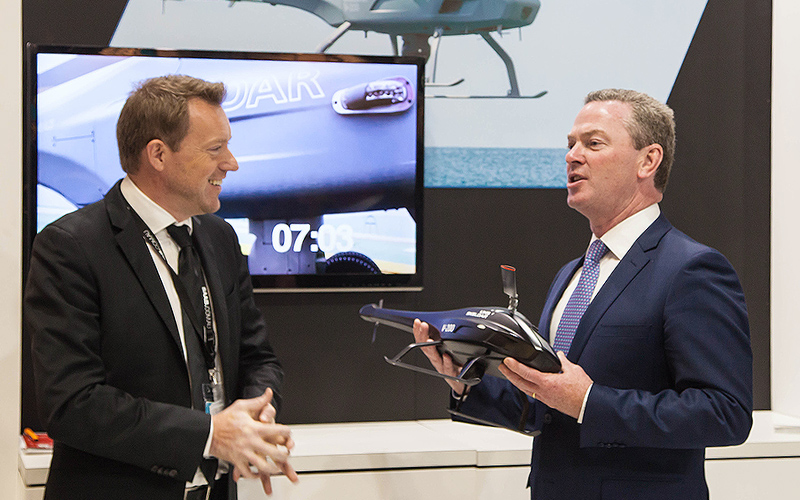 Australia’s Minister of Defence Industries Chris Pyne tries a (model) SKELDAR V-200 UAV for size at Saab’s stand at PACIFIC 2017 International Maritime Exposition pictured with UMS SKELDAR Head of Business Development David Willems. The V-200 includes excellent fuel consumption, an ability to cold start without the requirement for heaters and has the best time between overhaul (TBO) within its class, making it the ideal partner for navies and coastguards around the globe.

UMS SKELDAR is closing on Australian Defence contracts and has announced plans to establish an Australian base as a regional hub for the flagship unmanned helicopter SKELDAR V-200 to develop the military and civilian market in Australasia and the Pacific Rim.

The focus on Australia – and its strategic gateway to neighbouring Pacific nations – was cited by David Willems, UMS SKELDAR’s Head of Business Development, as a major priority for the company:

“It is a logical extension to our global expansion to focus on Australia, which plays a strategically pivotal role in military and economic terms across the Pacific Rim. Importantly, Australia is developing its defence industries, and we see our future development as innovator in the unmanned Vertical Take-off and Landing (VTOL) sector with strategic partners, to also cover the demanding requirements of the civilian sector including Intelligence, Surveillance and Reconnaissance (ISR) and Search & Rescue (SAR).”

Speaking at PACIFIC  2017, the maritime expo being held at Sydney 3-5 October, Willems continued:

“Our flagship unmanned helicopter SKELDAR V-200 covers all the bases with unmatched technology including Maritime and NATO-compliant heavy fuel engine and best in class payload options that provide an all-round superior rotary VTOL aircraft incorporating Saab’s experience of 80 years in the aviation industry. Our intention is that we will have a permanently-based platform here to demonstrate to the different stakeholders by next year.”

Saab’s President & CEO Håkan Buskhe (left) with David Willems, Head of Business Development UMS SKELDAR at PACIFIC 2017 International Maritime Exposition during a busy schedule of media briefings on the flagship unmanned helicopter, SKELDAR V-200, powered by a two-cylinder, in-line, two-stroke, liquid cooled internal combustion engine provided by Hirth Motors. It has one of the highest power to weight ratios available in comparison to competitor engines, includes a 235-kilo take-off weight and can carry a wide variety of payload options up to 40 kilos of weight. https://lnkd.in/gJZKAkx

The news from UMS SKELDAR follows closely on the heels of announcements made by joint venture partner Saab – with Saab Australia landing a major deal to provide the tactical interface to the Royal Australian Navy’s fleet of nine Future Frigates. The Saab 9LV Combat Management System would form an integral part of the Future Frigate and upgraded Air Warfare Destroyer combat capability as well as being selected for the Offshore Patrol Vessels. In addition, Saab was awarded a contract to provide a complete communications system on board the Royal New Zealand Navy’s future fleet replenishment vessel, HMNZS Aotearoa.

“Clearly our relationship with Saab as a top rank global player in the defence sector and marking its 30th anniversary in Australia this year,  provides an impressive strategic partnership. Our integrated offering, together with unmatched unmanned VTOL technology, including heavy fuel, we believe make us the partner of choice for navies, defence forces and civilian applications for missions in this region and worldwide.”