EMSA’s service of Remotely Piloted Aircraft Systems (RPAS) is now being used by the Danish authorities to monitor ship emissions around the area of the Great Belt where many large tankers transit on their way to and from the Baltic Sea. The RPAS will specifically measure the ships’ sulphur emissions to check compliance with EU rules governing the sulphur content of marine fuel.

The RPAS is fitted with a gas sensor, known as a sniffer, which is capable of measuring individual ship’s sulphur emissions. By flying in the plume of the ship, the RPAS can estimate the amount of sulphur in the fuel. This data is transferred immediately to the Danish authorities for follow-up, and reporting in THETIS-EU in the event that the ship may not be complying with the legal requirements of the European Emission Control Area (ECA).

These kinds of RPAS operations are expected to contribute to a more efficient enforcement of the Sulphur Directive, thereby reducing air pollution from ships while ensuring a level playing field for the companies involved. In Denmark, the Danish Environmental Protection Agency is responsible for enforcing the sulphur rules and the Danish Maritime Authority supports this work through ship inspections in Danish ports and now also with RPAS monitoring. As the service develops, flights will be able to be monitored by the authorities concerned via EMSA’s RPAS data centre which offers users an online interface displaying the flight detail (images, video, flight path, measurements, etc.) in real time. 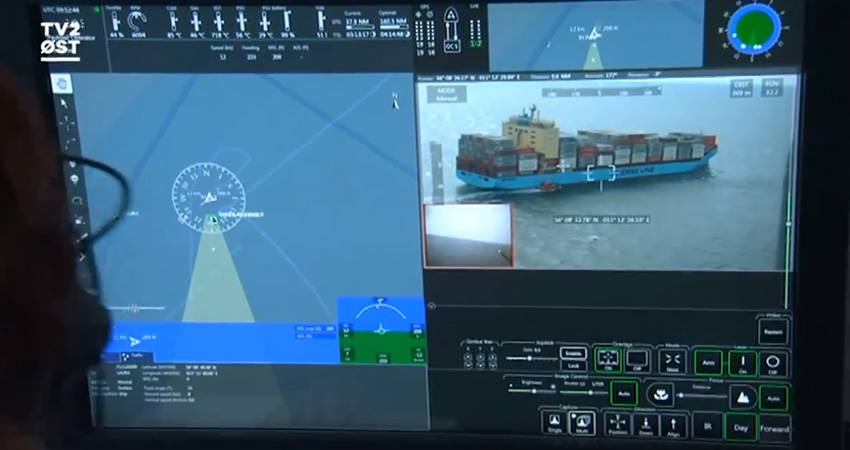 The RPAS in use is the UAS Skeldar V-200. In addition to a Fuel Sulphur Content dual sniffer system, its payload includes daylight and infrared cameras, as well as an AIS receiver. It is under contract with EMSA from a consortium comprising Nordic Unmanned AS, UMS Skeldar Sweden AB and NORCE Northern Research Institute AS. The sniffer system is provided by Explicit which also generates post-flight emissions reports.